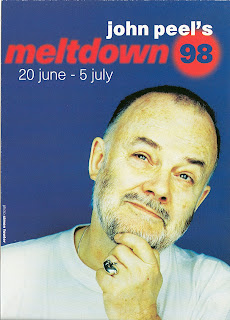 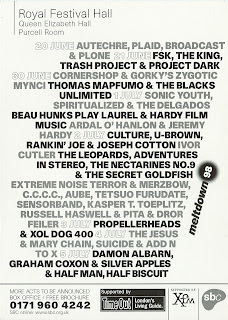 Broadcast on the John Peel show on 1st July 1998. These are four tracks from Sonic Youth's set at the Meltdown Festival which took place at London's Southbank Center. John Peel curated the 1998 event which had a very impressive line-up including the likes of Autechre, Plaid, Plone, FSK, The King, Trash Project, Project Dark, Cornershop, Gorky's Zygotic Mynci, Spiritulized, Delgadoes, Culture, Ivor Cutler, Extreme Noise Terror, The Jesus And Mary Chain... the list goes on. There does seem to be a big gaping Fall shaped hole in that line-up but perhaps Mark E. Smith and the boys were busy playing elsewhere that week or maybe just preferred to stay at home and watch the World Cup on the telly. This is Sonic Youth's contribution to the event as broadcast on the wireless.
I don't know how many of these performances were recorded but if you happen to have one why not lob it in the general direction of theperfumedgarden@outlook.com and I'll post it on here.

I don't want to do this but the file hosting's getting pricey! Any help would be hugely appreciated.